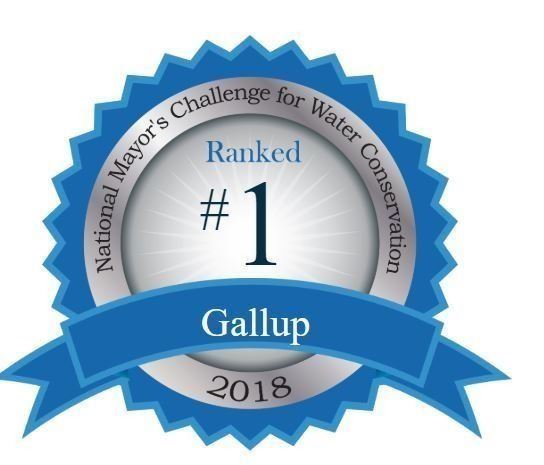 The city of Gallup, New Mexico, was named one of five national winners in the 7th Annual Wyland National Mayor’s Challenge for Water Conservation. Area Residents Make 7,010 Pledges, in the Population Category 5,000-29,999, to reduce their water use by 32 million gallons of water over the next year. The annual month-long public awareness campaign to promote drought resiliency and water quality ended on April 30, 2018 with mayors from 35 states vying to see whose city could be the nation’s most “water wise.”

The city of Gallup, New Mexico, was honored in a special ceremony on Tuesday, Aug. 7, in front of the McKinley County Courthouse, as one of five winning cities in the annual Wyland National Mayor’s Challenge for Water Conservation. Local residents, who made Wyland Foundation conservation pledges, earned the right to nominate a deserving charity in their community to receive the National Grand Prize, a 2018 Toyota RAV4 XL Hybrid. The event recognized the efforts of Gallup residents who pledged in April to reduce water use by 32 million gallons over the next year and make lifestyle changes to reduce harmful runoff into local waterways. Mayor Jackie McKinney and Toyota Director of Sustainability Kevin Butt were on hand to award the 2018 Toyota RAV4 XL Hybrid to Battered Families Inc. of Gallup, which was among 20,000 charities nominated nationwide. Battered Families Inc will use the vehicle to provide transportation to people throughout McKinley County who are dealing with domestic abuse. The charity provides emergency shelter, legal advocacy, batterer intervention. The fuel efficiency maintenance free vehicle is a tremendous benefit to the charity which serves people within a 120 mile radius.

“The challenge is a serious reminder to everyone about the importance of water to our cities and our country,” said marine life artist Wyland, who founded the Wyland Foundation in 1993. “This year we encouraged people to think about their consumption practices and see if they could find new ways to reduce pollution runoff and limit waste.”